October 23, 2018 ben
As an Amazon Associate, we may earn commissions from qualifying purchases from Amazon.com. Pink links are affiliate links and using them helps support LOoG.

I built my own radio control Tx and Rx for a quadcopter. I used nRF24L01+ transceiver modules and a 5v Arduino Pro Mini, but ultimately switch over to an HC-12. See details beneath the comparison below. 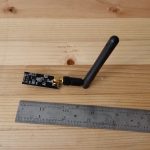 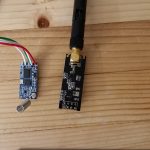 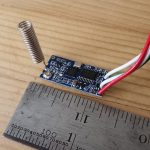 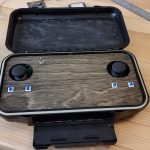 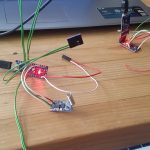 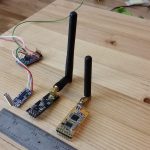 After getting the nRF24L01+ to work reliably at ranges less than 75 meters, but never achieving anywhere near the advertised >1000m range, I decided to use different transceiver modules. There are some things I wish I had considered better before building my R/C radio, but the cheap cost, wide availability, 1000m advertised ranges, and large number of programming resources sold me pretty quickly on the nRF24L01+ transceivers.

What I learned was that the 4×2 pin header arrangement made the boards annoying to work with, requiring some wiring harnesses or bulky break out adapter. Variable performance without a very well regulated 3.3v power supply, meant I couldn’t get quality performance with a direct connection to a an Arduino Pro Mini. That meant powering the nRF24L01+ with 3.3 volts via an additional AMS1117 3.3v regulator, and some capacitors.

When wired and powered properly, the modules were easy to use. Programming and a plethora of examples and information made it fairly easy to get reliable data transmission to about 100m. While 100m is fine for most applications, I wanted better range, with greater data integrity, perhaps less interference from 2.4ghz Wifi systems, and possibly a better circuit board layout/package.

In hindsight, what I really wanted to use was the HC-12(SI4463) 433mhz transceiver. The HC-12 operates on 5 volts, allowing it to be easily powered from a quadcopter power distribution board 5v supply. It has a single row of pins making it easier to wire, without additional crap. The footprint of the HC-12 circuit board is more compact than the nRF24 modules, and the stock helical antenna of the HC-12 performed as well as the max stable range I could get on the nRF24 with an SMA antenna. Perhaps it was transceiver configuration, power supply, or even the less crowded 433mhz band. Regardless of the actual cause, the results with the HC-12 transceivers were more inspiring, and the modules easier to work with.

Widely available libraries and resources, make the HC-12 easy to interact with, and allowed me to focus more effort toward coding what I want, and less on tinkering with how to interface with hardware.

The HC-12 modules also have an IPEX mount to easily replace the helical antenna, by adding either an IPEX antenna, or an IPEX to SMA adapter and an SMA antenna designed for the 433mhz bandwidth.

Buy HC-12 modules, in my not so humble opinion they are better than the NRF24. However, if you are looking at something supported by somebody passionate about DIY R/C Radios, check out TheDIYGuy999. He builds and publishes info and code for NRF24 radio R/C hardware and software. You’ll need to Buy NRF24 modules

10/24/18 Update
I’m finally going to have a little bit of free time to work on some code issues. The range is great, but I’m losing way too much data. The code is using a sum check to ensure data integrity. I’ll continue to re-publish as things get patched and updated.